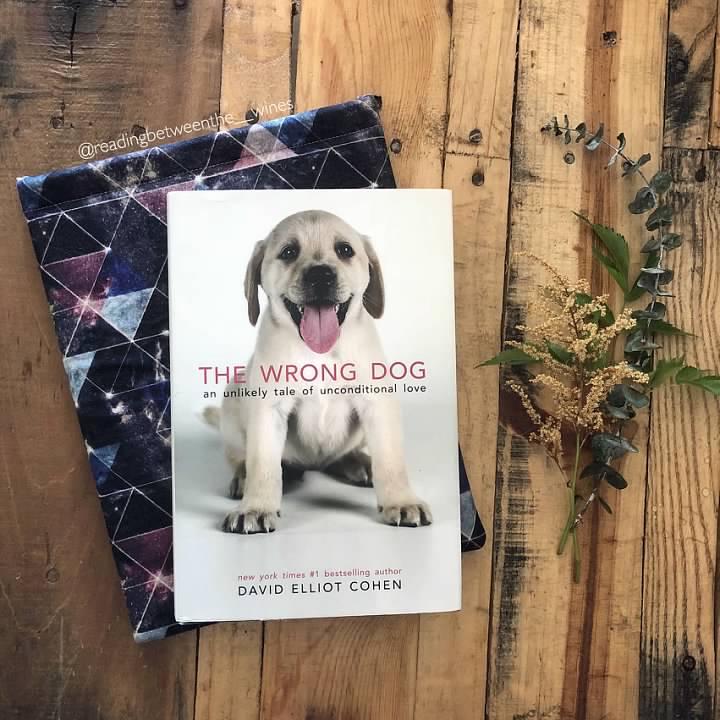 The Wrong Dog: An Unlikely Tale of Unconditional Love by David Elliot Cohen

Thank you to Yellow Pear Press for my beautiful finished copy and for allowing me to be a part of the blog tour in celebration of the paperback release yesterday.

Synopsis: In THE WRONG DOG, New York Times bestselling author David Elliot Cohen tells the humorous, engaging story of what happens when puppy pick-up instructions go disastrously awry and a boisterous rough-and-tumble ball of energy bursts onto the family scene. So begins the chronicle of the unexpected love between a big family and their giant lug of a high-spirited Lab that culminates in a once-in-a-lifetime road trip, revels in the glories of the human-canine relationship and, along the way, ponders the crucial difference between a good death and a bad death. In a memoir as poignant as it is funny, Cohen shares the true story of Simba II, a ninety-pound white Labrador retriever with honey-dipped ears and a proud bearing.

Simba enjoys most of his fourteen years living with his large blended family in bucolic Marin County, California. But then, when he is old and ailing, the family has to relocate across the country. The initial plan is to fly Simba to New York but the vet nixes that idea, citing Simba’s failing health. With the rest of his family already in Manhattan, Cohen and his best friend Erick decide that their only choice is to load Simba into the back of the family station wagon and embark on a 3,291-mile road trip across America. The goal of the journey: to reunite Simba with his loving family while hitting some of the high spots along the way.

Together, this trio of unlikely adventurers motors coast to coast, encountering mobs of Las Vegas tourists, the Petrified Forest, and a host of wacky Route 66 oddities, including the world’s tallest thermometer, Meteor Crater, Cadillac Ranch, and Graceland. The constant question is: Will Simba live long enough to make it to New York City?

THE WRONG DOG is an insightful story filled with historical and geographic trivia and told with self-deprecating wit and mature perception. It lovingly reminds readers that a good death is our final blessing.

“Exceptionally well written, consistently engaging, highly entertaining, The Wrong Dog is especially recommended for those with their own canine companion.” Midwest Book Review

“Despite the adorable puppy portrait on the cover, the book is more than the story of Simba and the cross-country road trip. It’s a beautifully written memoir. At times it reads like an offbeat sightseeing guide…at other times it is funny, sweet and sad.” Linda Wilson Fuoco, Pittsburgh Post-Gazette

“Part Marley and Me, part Bucket List, part travel memoir…David Elliot Cohen shows that sometimes a situation that seems so wrong actually turns out all right in the end.” Sara Hodon, Compulsive Reader

About the Author: Author and editor David Elliot Cohen has created or co-created more than 70 books that have collectively sold more than six million copies. Most were in the very popular Day in the Life and America 24/7 photography book series. Four of Cohen’s books have been New York Times bestsellers. Seven others, including his 1999 travelogue, One Year Off, were national bestsellers in the US or abroad.

Cohen has been profiled in The New York Times, People and other major periodicals. He has appeared on The Today Show, Good Morning America, CBS Sunday Morning, NPR’s All Things Considered and many other major news programs. He grew up in Erie, Pennsylvania and graduated from Yale University. He lives in Manhattan and Tiburon, California and is married to corporate attorney Laureen Seeger. Together, they have five children…and a dog.

Thoughts: I’m the type of person that can watch countless horror and suspense movies without blinking an eye as the main characters get picked off, but hurt the dog and I instantly tear up and have to look away. So I’m not one to subject myself to that type of torture on purpose. I normally refuse to read/watch anything that looks like it’s going to be about a dog and have a sad ending. But while I haven’t been able to read The Wrong Dog yet, I do plan to. It looks like an excellent read, and after having to put down the first of three family dogs recently, I think it would be good for me regardless of whether it makes me bawl my eyes out.

Purchase The Wrong Dog on Amazon

Giveaway: From now until September 14th readers are invited to share a photo of their pup (on their blog or instagram) and share his or her naughtiest story. Info about entering on Instagram can be found here, and if you are entering via blog post, please link your post in the comments so that I can see it. My favorite story will win a copy of The Wrong Dog and will be eligible to win The Wrong Dog grand prize, which includes a signed copy, kong toy and bandana.

My Dogs: What kind of blog post about dogs would be complete without showing off my own dogs?

This is Juice, one of the three chihuahuas my family has had since I was in middle school. Unfortunately, we had to say goodbye to her in April. 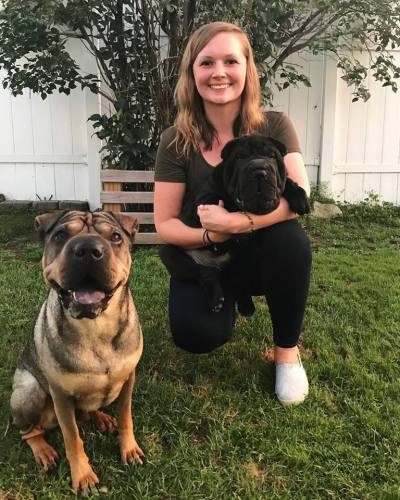 And this is me with my fur babies, Opie and Dude. Dude just had his second puppy check up today, and everyone at the vet loves him! We’re hoping he doesn’t come to despise the vet the way that Opie does…

Dude is too young to have a good naughty dog story, but I will share Opie’s. We’ve brought him into TJ Maxx a few times, and I remember the first time was so adorable, because he picked out a toy and carried it all the way to the register by himself. Well, the last time we brought him in there he was so thrilled to see everyone and I could tell he was getting a little too excited… he has a tendency to poop whenever we go anywhere because of all the excitement. I can just tell when he needs to poop. When I realized he needed to, of course we were at the back of the store. I tried to hurry him to the door, but it was too late; he pooped on the floor. I had poop bags, so I figured it wasn’t the end of the world… until he stepped in it and smeared it everywhere. We haven’t brought him back in since. (: 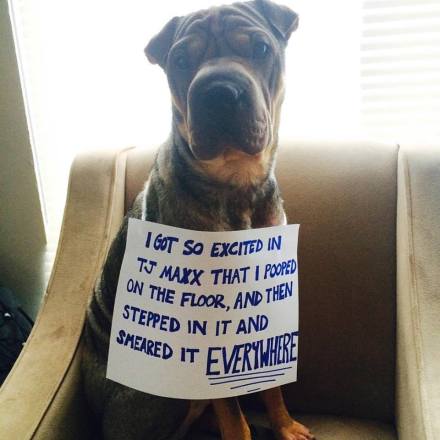